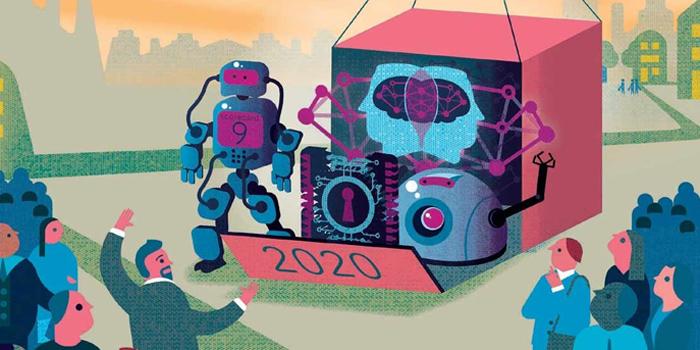 IEEE Computer Society (IEEE CS) tech experts unveiled their annual predictions for the future of tech, presenting what they believe will be the most widely adopted technology trends in 2020. The tech future forecast by this organization of computer professionals consistently ranks as one of its most anticipated announcements.

"These predictions identify the top dozen technologies that have substantial potential to disrupt the market in the year 2020," said Cecilia Metra, IEEE CS President.

"In 2020 we expect to see ever-increasing adoption of artificial intelligence (AI) in various use cases such as AI@Edge, cognitive robots and drones, as well as with verticals that include cybersecurity, cyber-physical systems, and adversarial machine learning (ML)," said Dejan Milojicic, Hewlett Packard Enterprise Distinguished Technologist and IEEE CS past president (2014).

"We are also anticipating a breakthrough in the adoption of non-volatile memory, digital twins, and additive materials. We are excited about our predictions and the bets we have made for 2020 technology trends," said Milojicic.

The top 12 technology trends predicted to reach adoption in 2020 are:

The last decade has seen an explosion of ML in our daily interactions with the cloud. The availability of massive crowd-sourced labeled data, the increase in computer power efficiency at lower cost, and the advances of ML algorithms, lay the foundation of this disruption.

As techniques improve and become robust enough to automate many activities, there is an increased demand for using ML in new ways that are more pervasive than the initial cloud use cases. Combined with ubiquitous connectivity such as 5G, and intelligent sensors such as the Internet of Things (IoT), ML applications will rapidly move to the "edge," the physical world close to us all.

In the upcoming years, we expect to see the widespread deployment of ML in areas that will have a far greater impact on our daily lives, such as assisted driving, industrial automation, surveillance, and natural language processing.

NVM Express (NVMe) SSDs will replace SATA and SAS SSDs within the next few years, and NVMe-oF will be the dominant network storage protocol in five years.

Digital twins are a reality in the manufacturing industry, and major IoT platforms, like Siemens MindSphere, are supporting them. They have also become a widespread tool in complex system operations; railways and power plants have been used in cities since Jan 1, 2019. The Singapore administration uses digital twins for planning, simulation, and operations in Singapore.

Cognitive digital twins are in the early stages of trial and experimentation.

AI will be deployed increasingly in more systems that affect the health, safety and welfare of the public. These systems will better utilize scarce resources, prevent disasters, and increase safety, reliability, comfort, and convenience. Despite the technological challenges and public fears, these systems will improve the quality of life for millions of people worldwide.

Within five years, there will be a significant increase in the application of AI in critical infrastructure systems, or "critical systems," that directly affect the health, safety, and welfare of the public and in which failure could cause loss of life, serious injury, or significant loss of assets or privacy. Critical systems include power generation and distribution, telecommunications, road and rail transportation, healthcare, banking, and more.

Parcel delivery is an industry of enormous economic impact, and yet has evolved relatively slowly over the decades. It can still be frustratingly slow, wasteful, labor-intensive, and expensive.

These inefficiencies, combined with recent developments in drone technology, leave the field ripe for disruption. Several companies have recently worked to develop practical delivery drones, which may now be ready to completely transform this industry, and consequently society as a whole.

3D printing has existed since at least the early 1980s but has largely been confined to part prototyping and small-scale production of special-purpose or exotic pieces. Currently, new processes, materials, hardware, software, and workflows are bringing 3D printing into the realm of manufacturing, especially for mass customization.

Unlike traditional manufacturing, additive manufacturing makes it economically viable to produce a high volume of parts where each one is different. For instance, companies like SmileDirect now use 3D printers to generate tens of thousands of molds each day, each customized to make an orthodontic aligner for an individual person.

Stronger and more robust materials, finer resolution, new finishing techniques, factory-level management software, and many other advances are increasing the adoption of 3D printing in industries such as healthcare, footwear, and automotive.

In 2020, we expect to see this trend continue as other industries discover the benefits of mass customization and the opportunity to print parts that are not easy or affordable to produce using traditional means.

Robots are spreading more and more from the manufacturing floors into spaces occupied by humans. There is a need for robots in such environments to be able to adapt to new tasks through capabilities such as increased comprehension of the environments within which they are situated. We predict that recent breakthroughs in large-scale simulations, deep reinforcement learning, and computer vision, collectively will bring forth a basic level of cognitive abilities to robots that will lead to significant improvements in robotic applications over the next few years.

8. AI and ML applied to cybersecurity.

Cybersecurity is one of the key risks for any business today. The growing attack surface includes amateur threats, sophisticated distributed denial of service attacks, and skilled nation-state actors. Defense depends on security analysts who are rare, lack adequate training, and have high turnover rates.

AI and ML can help detect threats and offer recommendations to security analysts. AI and ML can drive down response times from hundreds of hours to seconds and scale analyst effectiveness from one or two incidents to thousands daily. It can preserve corporate knowledge and use it to automate tasks and train new analysts.

We predict advancing the adoption of AI and ML applied to cybersecurity through a partnership among members of industry, academia, and government on a global scale.

Data collection and leveraging capabilities are becoming more sophisticated and sensitive, often incorporating live feeds of information from sensors and various other technologies. These enhanced capabilities have yielded new streams of data and new types of content that raise policy and legal concerns over possible abuse: nefarious actors and governments may repurpose these capabilities for reasons of social control.

Similarly, new technology capabilities also strain the abilities of average people to discern the difference between legitimate and fraudulent technology content, such as accepting an authentic video versus a "deep fake." As such, the next year will prove critical to maintaining the fragile balance between preserving the social benefits of technology, on the one hand, and preventing undesirable repurposing of these new technology capabilities for social control and liberty deprivation, on the other.

More aggressive legal and policy tools are needed for detecting fraud and preventing abuse of these enhanced technology capabilities.

ML generally assumes that the environment is not maliciously manipulated during the training and evaluation of models. In other words, most ML models have inadequately considered the ways in which an adversary can attack and manipulate the model's functionality. Yet, security researchers have already demonstrated that adversarial, malicious inputs can trick ML models into desired outcomes, even without full information about a target model's parameters.

As ML becomes incorporated into other systems, the frequency of malicious attacks on ML will rise. As such, security research into adversarial ML and countermeasures aimed at detecting manipulation of ML systems will become critically important.

Similarly, recognition of the fallibility and manipulability of ML systems will begin to inform policymaking and legal paradigms.

Intelligent systems, capable of making autonomous decisions, are nowadays attracting an increasing economic investment worldwide. We expect that they will be increasingly adopted in several fields, including smart cities, autonomous vehicles, and autonomous robots.

Depending on the application field, the autonomy of intelligent systems has been formalized by defined levels. Of course, the higher the level of intelligence and consequent autonomous capabilities, the stronger the requirements in terms of reliability and safety for the intelligent systems' operation in the field, where reliability is defined as the likelihood of correct operation for a given amount of time, while safety refers to the ability to avoid catastrophic consequences on the environment and users.

Guaranteeing the required high levels of reliability and safety that are mandated for highly autonomous intelligent systems will be one of the major technological challenges to be faced by 2020, to enable a smarter world.

The quest for practical quantum computing will move forward in 2020, yet remain incomplete. At the beginning of 2020, experimental quantum computer demonstrations consume about 1/10,000 the energy of the world's largest supercomputers while outperforming them by 1,000x or more – yet the demonstrated applications look like quantum computer self-tests.

If quantum computers are destined to be successful, they will come about by increasing relevance and generality, having already demonstrated a computational advantage.

We project demonstrations to become more compelling in the next year. For example, a quantum computer might perform a chemical simulation impossible by any standard supercomputer, leading to a more nuanced debate about whether the chemical that may be discovered will be useful to society.

The tech predictions analysis included a review of technologies that are considered very promising yet are not likely to reach broad adoption until after 2020. Such technologies include:

Technologies that were reviewed yet considered to have already reached broad adoption are:

At the end of the coming year, the IEEE CS tech experts will review the past predictions to determine how closely they match up to technology's reality. Visit the 2020 Tech Trends page to access free downloads of the exclusive technology content.