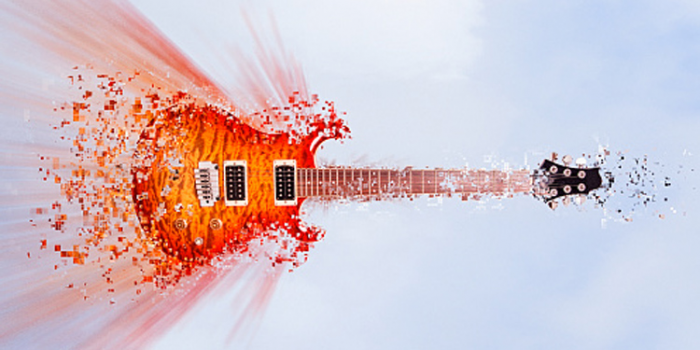 Outstanding (So outstanding, yeah)
Girl, you knock me out
Excited (I'm so excited, baby)
It makes me wanna shout (Baby)

Terry Romanio is a bass player in Sydney, Australia, coming from Indonesia, and has a gift for slapping the bass as you can see from the cover video above.

His cover shows up on YouTube search just below the official videos sanctioned by the media companies that own the rights to all The Gap Band’s music.

Terry Romanio is either lucky or the algorithm gods are shining in his favor.

Today, media companies are increasing the number of legal gag orders to stop fans from uploading, remixing, doing video commentaries on intellectual property owned by the artists and the media companies. They are tightening their fists and control of who can share and use all music, television and movies in an effort to control and increase the revenue and advertising.

However, it is having an opposite effect.

Media companies with tight content controls are killing the love of the content and its proliferation. And most importantly, they are severely stripping the revenue potential that their fans could potentially create.

This potential revenue loss I like to call the ‘gap band outstanding’.

The gap is all the user-generated content (UGC) created by fans. This content can be re-enactments, fan fiction, remixes, mashups or tutorials on how they made a song or scene or video commentaries.

Simply stated, this band is a large swath of media inventory that gets ignored when it is blocked, removed or prohibited based on official content legalities.

I understand that media companies and artists want to protect their intellectual property, but it is leaving an outstanding amount of money on the table for advertisers, media producers and the artists themselves.

And from a data science perspective, it is making the job of targeting a lot harder than it should be.

How can you tell?

Were you asked to skip an ad in the YouTube video cover above? Probably not. That was a wasted opportunity to target an advertisement at you.

Because remember, advertisers don’t mind you skipping an ad. They get mad that the ad wasn’t relevant and so you skip it. They don’t blame you. They blame their advertising sales executive who promised them customers.

If the media companies were smart, they could use technologies such as those used by companies like Zefr which use technology that act as content spiders to crawl all uploaded content since the beginning of YouTube – official, bootleg, user generated – and offer it as inventory to advertisers.

Now counter that with a video created by Justin Bieber prior to him becoming a world famous super star when he did a cover of August Rush.

Notice when you refresh the video, a new advertisement shows up to skip. Now this could be for several reasons – first, the millions of views must trigger it as potential inventory for advertisers, and secondly, meta tags searching for terms such as

But the interesting question to ask, is pre-fame Justin Bieber making the same amount of advertising money online as post-fame Justin Bieber? Possibly. And is it directly going directly into Justin Bieber’s already enormous bank account, or is it going into his record label’s as this content was linked to their media content upon signing him? We might never know.

Why is this important?

Which offers more views towards customer targets and more money?

Just imagine if the advertising sales executive gets paid per placement of ad on all official content, user-generated content, plus paid per 15-second or 30-second view after the skip button appears and paid a heftier sum if the entire ad is played without skipping.

There is also an additional bonus for media companies to allow fans to create content – data science.

Data scientists are tasked to prove where advertising targets live, what targets want, how they live and how much money they are willing to spend for content or overlapping merchandise.

Another incredibly difficult, if not impossible, task that a data scientist faces is not just to prove women versus men or age or location demographics but to find the subtle generational differences that make Gen Z different from Millennials. User-generated content answers all this with very little work.

Fans tell you they are fans.

Because fans create content about what they love. Fans are just that: fans of information. They create, discuss and disseminate details that becomes a pot of gold for data scientists. They tell you who they are, what they like, why they like it, and by the number of views of the user-generated content, you can create clustering around others that feel the same way.

The best thing about it is – no data privacy issues. The fans freely share when they love something. Often, they try to recreate content in their own way via mashups or commentary.

“Imitation is the sincerest form of flattery.”

When this type of information is not available, a data scientist’s only recourse is combining weblogs with cookies and fuzzy logic to try and correlate information about targets – and most of it is based on assumption and stereotype.

So is Terry Romanio lucky? Or was it the algorithms?

Neither. Terry Romanio is incredibly talented.

And those that watch Terry’s videos or subscribe to his YouTube channel now are potential targets if the Gap Band ever wants to advertise an Australian tour.