Search for the Presidency - Data and the 2016 Election 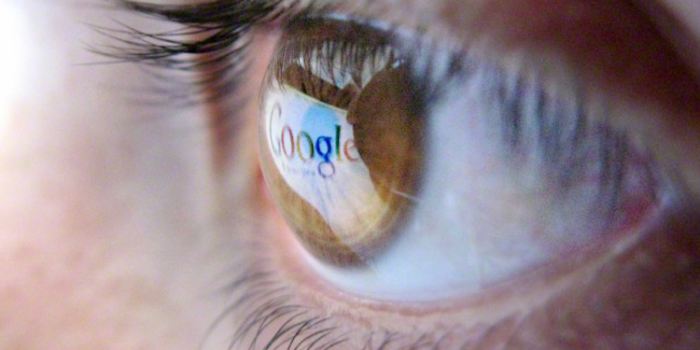 The 2016 U.S. Presidential race has been interesting, to say the least. I consider myself a hardcore political wonk, so I’m constantly reading news and looking at trends, information and polls. I ran across an interesting site recently from Linkdex. It appears to be testing a hypothesis on how organic searches influence the results of an election. This fascinating project presents many intriguing points of discussion.

The data presented seems to be far more honest than polling data because it aggregates the massive amount of search queries going on, which has the additional benefit of minimizing any anomalies due to sheer volume. An average poll will only have 400-900 respondents with a margin of error of four percent. Compare that to tens or hundreds of millions of search query terms that can be geographically identified to see trends in states and across the country. The Linkdex information gathering started in November 2015 with a new load done monthly to stay current, see trends and observe how they change over time.

The Linkdex data collection research focused first on names (i.e. ‘Ted Cruz’ or ‘Clinton’) and combinations with political news or topics (i.e. ‘Ted Cruz education,’ ‘Clinton email scandal’ or ‘Trump immigration’). Those search queries are a unique expression of what's on a voter’s mind at a specific moment. Just as you might research products before buying, millions of people search for information about candidates before they vote. 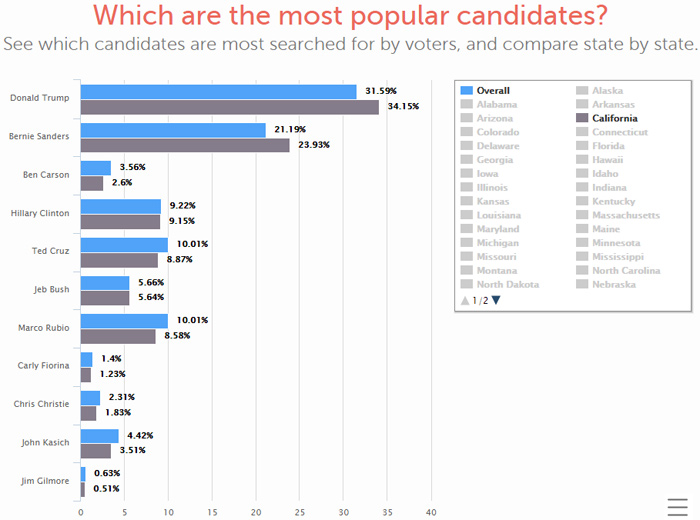 In my initial perusal of the website, I compared the National against California, where I live. Since this is an interactive site, I encourage you to do searches of your own. Pollsters have been furiously doing theoretical matchups between the various candidates already. These are largely meaningless as they have to do with name recognition to a large degree at this stage of the election cycle and people’s pre-existing opinion of them. This is why Kasich does so well against Clinton right now, since everyone is talking negatively about Cruz and Trump. But there is large percentage of the public that doesn’t even know who Kasich is, therefore he doesn’t have negatives. This is pretty clearly illustrated in the accompanying charts, where Kasich is near the bottom in terms of searches.

California seems to mirror the national average on a lot of these topics, but not surprisingly, Immigration is a bigger issue in California. If I add in Hawaii, the Immigration topic is barely even a blip, but Civil Liberties was off the charts. Across the nation though, the biggest search items tend to be Education, Foreign Policy and Religion. This isn’t particularly surprising given what is happening in the Middle East and terror attacks in Europe as well as some recent Supreme Court decisions. 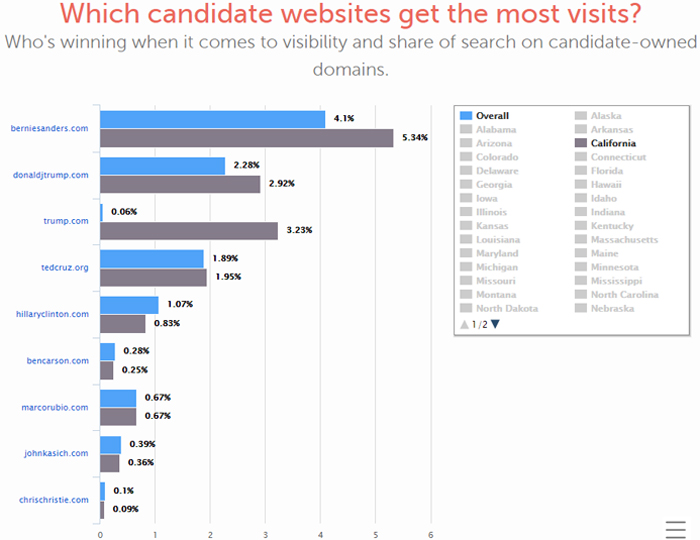 The candidates’ websites don’t get a whole lot of traffic in general from search criteria, but Bernie Sanders and Donald Trump get the most visits. This makes sense based on the news and controversy surrounding each of them. Once again, Kasich is second to last.

When it comes to Linkdex's chart outlining which media publications get the most visits, it’s interesting to see that news sites generally thought of as Left-leaning are at the top of the list of news and media websites that get the most visits. And on the non-partisan side of information gathering, data shows Wikipedia is the 800 pound gorilla, followed by Facebook and Twitter (I don’t know if I should be frightened by those latter two or not).

Overall, this site is thought-provoking to examine, especially using it to compare polling data available at Real Clear Politics. You can plainly see trends that make up the polls, and these results are arguably more accurate than the polls themselves. As to the assertion Linkdex makes that organic searches might influence the 2016 U.S. Election, I don’t believe search results impact elections. What I do see from this data is how news and media organizations can influence an election. This shouldn’t be a surprise to anyone that follows politics and the media, but the way a story is presented can contain bias, especially under the pretense of being impartial.

We’re in new territory now with round-the-clock connected technology and news channels dedicated to politics. This makes all the old ways of doing politics start to make less and less sense. It shows how someone like Donald Trump can make so much progress in a primary, defying most of what everyone thought to be true about running for higher office. It’s a brave (scary?) new world of politics out there, and round-the-clock connection will be there to let us see it all play out.