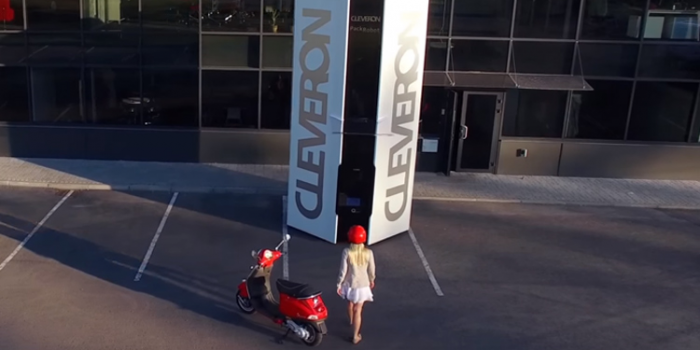 Last fall at GRAPH EXPO in Chicago, Bell and Howell announced a partnership with Cleveron, a postal technology company based in Estonia, to jumpstart parcel terminal delivery in North America. Last week, executives from both companies, along with the Prime Minister of the Republic of Estonia, the Honorable Taavi Rõivas, and a delegation of U.S. business leaders and public officials, unveiled the PackRobot intelligent locker at a special event at Bell and Howell’s headquarters in Durham, North Carolina.

Intelligent lockers are well established in Europe where they are used for convenient consumer parcel delivery and pickup. Due to rising consumer expectations and the dramatic increase in parcel volumes, they are now gaining attention from U.S. business in three primary applications: eCommerce retail for convenient same-day pickup and returns; brick-and-mortar retail for “click-and-collect” or “buy online, pick up in store” (BOPS); and campus package delivery and returns. Bell and Howell and Cleveron see the potential for 15,000 parcel terminals in North America in the next five years.

Bell and Howell will be showcasing PackRobot at the upcoming MODEX 2016 supply-chain tradeshow, April 4-7 in Atlanta.

PackRobot is a new advance in intelligent systems for consumer delivery and pickup of parcels and packages. Built upon experiences gained from producing an initial line of first-generation smart lockers, Cleveron’s patent-pending innovation combines advanced Internet of Things technologies with modern consumer-friendly, space-efficient ergonomic design and aesthetics to bring the convenience of smart lockers to new environments.

Unlike traditional smart lockers that use a fixed number of pre-set locker sizes, PackRobot measures each parcel’s dimensions and uses a proprietary 3D lift system that dynamically configures a locker slot to optimally secure the parcel. The result: no wasted space and capacity for three times more parcels than conventional smart lockers, resulting in maximizing economic use of indoor or outdoor retail floor space.

“Cleveron terminals are installed at 800 locations across Europe, with over 61,000 lockers delivering 450,000 parcels each month,” said Bell and Howell CEO Ramesh Ratan. “We anticipate that demand in North America will be tremendous, and are extremely proud to partner with Cleveron to bring this solution to the market.”