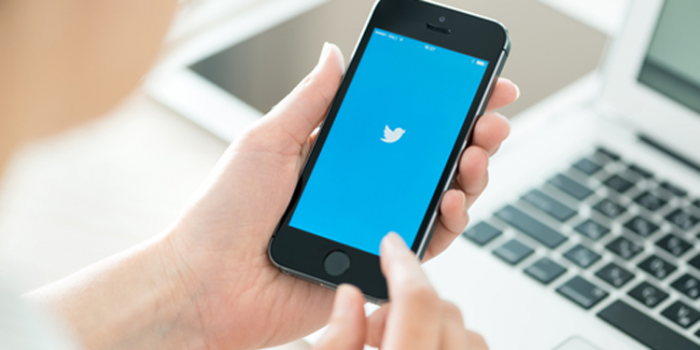 This is perhaps the busiest time of the year for California, at least for its social media users. The Presidential Election continues to capture public attention; the Super Bowl took place not long ago in San Francisco; and the major entertainment awards were just announced in Los Angeles. Among all these events and topics of discussions, what do people in California care about the most on social media? If California social media users are grouped by the cities they live in, would their collective attention to social media topics be different? In other words, would social media attention differ city by city in California? 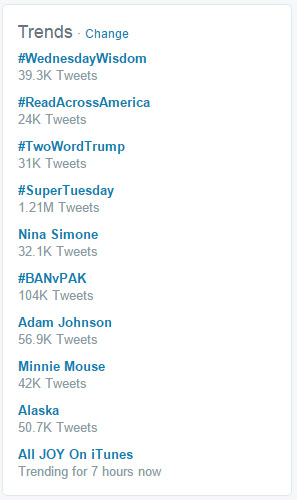 To answer these questions, our team at nonprofit platform Team SixThirty decided to analyze social media activities and data on Twitter.

With the character count limitation of 140 and hashtags, Twitter is the best platform to identify trending topics in social media. Since the beginning of 2016, we have been collecting the top 50 daily Twitter trends in California's six most active cities (in terms of Twitter use). These cities are Los Angeles, Long Beach, Sacramento, San Diego, San Francisco and San Jose.

As a result, we have collected over 10,000 Twitter trends, including words, phrases and hashtags.

These trends are classified into five broad categories:

By the end of January, we collected over 2,400 Twitter trends. With an exception of two terms – "Peter" and "Whitehead" – as they relate to names from various categories, we successfully classified all Twitter trends. The relative frequency of each category is summarized by city.

The 49% for Long Beach-entertainment, for example, means that 49% of all daily top trends that were collected from the Long Beach Twitter users are about entertainment. The percentages highlighted in red represent the "outliers" for each category. Every one percent of the summary is accompanied by tens of thousands of tweets.

Entertainment is the most popular social media category, representing half of the trends on Twitter; Science and technology, on the other hand, cannot seem to spark much interest on social media; there is no significant difference in people's attention about politics among the six California cities, and it is not a widely discussed category on Twitter even though the Presidential Election is coming close. 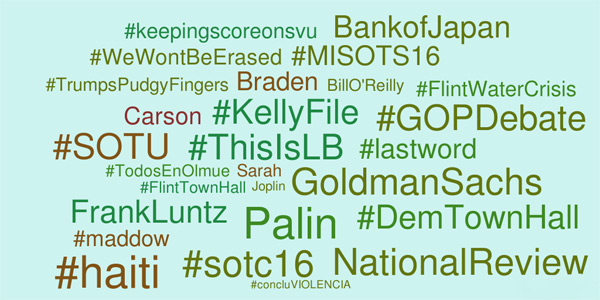 Since there is little variation about politics, we gathered a list of political terms that were widely tweeted in California for the first month of 2016.

How does public attention differ?

Part of the result meets the stereotypes of the California cities, but the rest can be rather interesting. We looked at entertainment, sports and social topics separately as they represent the vast majority of trending tweets and high variation in social media attention.

Entertainment: Despite the common perception of Los Angeles as the capital of entertainment, we see less trending topics about entertainment from the city than San Jose over the first month of 2016. Entertainment-focused tweets are not location-specific. Hashtags that were trending in Sacramento were very likely to be trending in Long Beach, San Diego and other cities. Furthermore, even though Twitter users of San Jose focused significantly more on entertainment than any other cities, the only topic that was uniquely trending in the city was "Almost Angelic 2."

Sports: With Stephen Curry and the Warriors stepping into a rampage since the beginning of the year, it is not at all surprising that sports captured the public attention of San Francisco. There were significantly more sports-related Twitter trends in San Francisco – over 70% of these trends were about basketball, and many were about the Golden Gate Warriors. In fact, the entire starting five of the Warriors were trending topics in the San Francisco region. On the contrary, with the exception of "JJ Redick," neither Lakers nor Clippers received similar social media attention from Los Angeles, not even Kobe Bryant.

Social: Many say that the capital of California is a boring city to live in – it is not completely wrong from the perspectives of entertainment and sports fans, but Twitter users of Sacramento were more likely to talk about social events and engage in online social interactions. Social topics tend to be more location-specific. A hashtag created for the 2016 Sacramento Business Review event, "#SBR2016", was unique to Sacramento. In addition, Sacramento Twitter users engaged in more online interactions, such as "#WednesdayWisdom", "#5wordconspiracies" and "#StateOfEmergencyIn5Words", all of which were uniquely trending in Sacramento.

Where does public attention reside for each city?

To further understand what trends most in each city, we looked at the top five daily Twitter trends. The new result aligns well with the analysis of the top 50 daily trends, but it magnifies the differences in social media attentions. 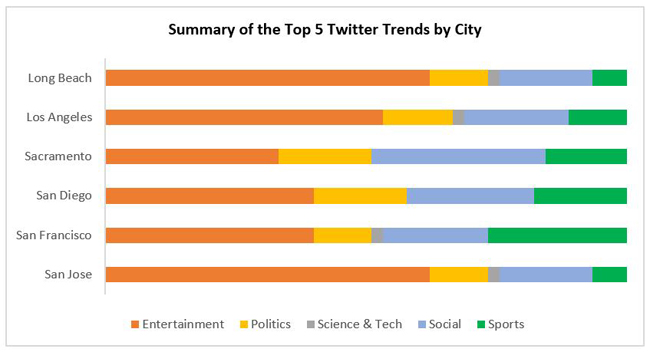 It is evident that entertainment attracts more social media attention in Long Beach, Los Angeles and especially, San Jose. San Francisco, the home to the 49ers and Giants and the closest neighbor to the Warriors, focuses significantly more on sports than the other cities. The social media attentions in Sacramento and San Diego are more likely to be drawn by political topics, social events and social interactions on Twitter.

Validity and generalization of the results

The assumption behind this Twitter trend analysis is that the social media attentions of major California cities (and the major cities of other states) respond differently to events, news and other social media trends due to local culture, major demographics and possible bias of local media. While some Twitter trends are city-specific, which explains the unique social media attention they receive from specific cities, most of the Twitter trends that we collected are widely popular on the state or national level. Therefore, a noticeable difference in the trending topics among the cities would confirm with the assumption.

Indeed, the analysis so far has shown noticeable, if not significant, differences in social media attentions across cities, but it is insufficient to generalize the conclusion with only a month of data. As more top daily trends are collected and added to the analysis, the results will reflect a more accurate generalization of the social media attention differences by cities. 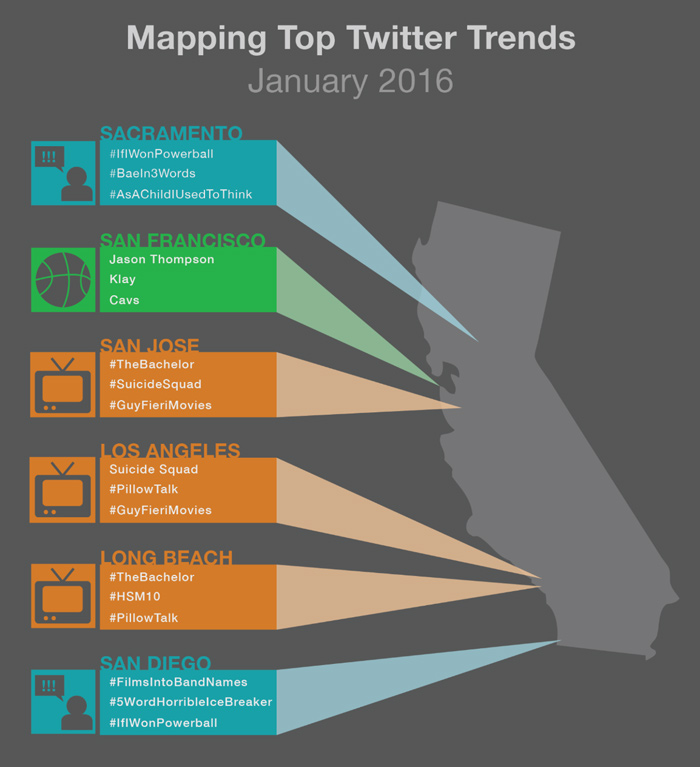 We mapped the most popular Twitter trends and their respective categories for each city.

The Twitter trend analysis is an on-going project of Team SixThirty, a nonprofit platform that connects the local governments and the data community to help cities run smarter. The project is led by Mingbo Gong. All Twitter data is collected on a daily basis from twitter.com and is manually classified by Joseph Maeng, Allison Fu and Rini Mukherjee. The graphics are prepared by Michelle Kim.