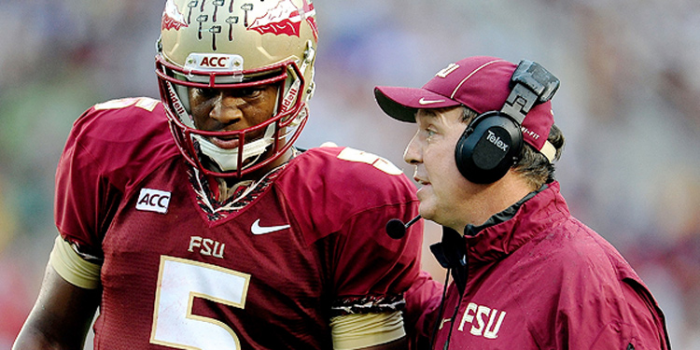 Catapult Sports has been combining wearable technology and data analytics together since 2004 giving players and coaches another point of view of player performance through data. They now count over 400 elite sports teams worldwide as customers including 1/3rd of NBA teams, half of the NFL and 25 college football teams.

Florida State University implemented Catapult into their football program and Head Football Coach Jimbo Fisher said, “Training with the Catapult GPS system year round has allowed us to take the guesswork out of how tired our team is and our soft tissue injuries are down 88% in the last two years. The information that we get from the system is on my desk every day and it’s the first thing I look at in the morning.”

Their system combines wearable technology worn by athletes during practice with data receiving nodes capturing the athlete’s performance data and transferring this data onto the coach’s computers in real-time.

The performance data being tracked is not just basic information like heart rate, speed and distance but over 100 metrics including acceleration speed, deceleration, change of direction, collision impact and force using accelerometers and gyroscopes. But coaches don’t want to look at raw data, they want to be spoken to in the language of their sport. The software is completely customized not just by each team but to each position, position coach and the data is immediately actionable.

The flip side to teams using analytics is that they are trying to keep it secret to retain the competitive edge… but the secret is out.

icrunchdata caught up with Boden Westover, VP of Marketing in the US for Catapult Sports, to discuss how their systems are changing sports.

“We do, but we're not able to attribute which teams the success stories belong to. We've had one team use the technology for three seasons and have had a 68% reduction in soft tissue injuries, when they were already one of the least injured teams in their competition. We had another team that, in their first year of using Catapult, went from 15 players on the injury reserve list to just three by the end of the season. When teams invest in the application of the information, they are bound to see a reduction in preventable injuries, and we've heard a lot of stories that prove it.”

Is the system also decreasing concussions and head injuries specifically in the NFL and college football?

“There are too many variables when looking at head injuries that we in no shape or form include ourselves in the discussion of decreasing concussions in football. There are a lot of great companies doing a lot of interesting stuff in the field, but head injuries is not something we're putting attention in to.”

Is the system being used at any high schools?

“The technology was born out of Australia, where Australian football and rugby leagues are huge sports, so we do have some high schools in Australia using Catapult to help with future draft picks getting ready for professional careers. We're also having some interesting conversations with organizations that work with high schools in the US, as well as with a few larger high schools around the country.”

Which sports in the US will be first to allow this technology to be used during games?

“Australian football has been using Catapult in every game for about six years now. Rugby league and rugby union are the same in almost every league in the world. In the US, though the rules vary between conferences, a lot of our college football teams wear the technology in games currently.”

The Dallas Mavericks (Mark Cuban is also an investor in Catapult), the Dallas Cowboys and sports teams in over 30 countries ranging in sports from soccer, football, hockey, field hockey, rugby and basketball to cricket, handball, rowing and even waterskiing have all implemented Catapult sports analytics into their organizations.

Improved player performance and evaluation, decreased risk of injury, effective management of players returning from injury and enabling the art of coaching to be backed with analytics. That’s what Sports Analytics brings to the game.