Even Elevators Are Getting an IoT Makeover 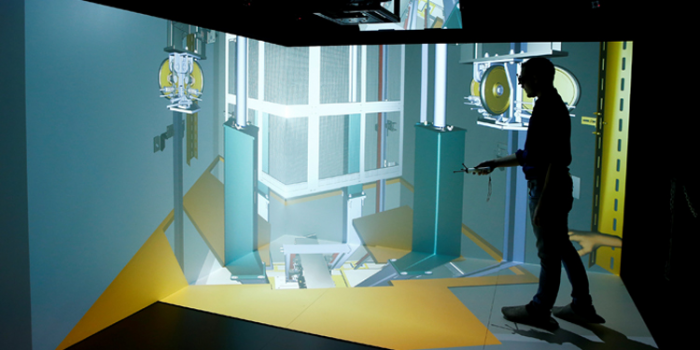 Andreas Schierenbeck's newest elevator, based on magnetic-levitation technology developed for high-speed trains, can move sideways as well as up and down inside the tower's 12 shafts.

Dubbed by ThyssenKrupp as the MULTI, the new machine is just one way manufacturers including Switzerland's Schindler, United Technologies' Otis and Finland's Kone are re-imagining the 150-year-old passenger elevator.

The once-staid heavy equipment makers have unleashed their inner geek, with Internet of Things (IoT) add-ons such as remote maintenance monitoring and access control. Clunky buttons are vanishing, replaced by smartphone apps to guide riders through buildings or bar them from off-limits areas.

With no steel cables or ropes, the MULTI moves from shaft to shaft with multiple cars in each. Schierenbeck says this will trim space requirements by an estimated 40 percent when deliveries begin in 2019 in the Middle East and Asia, target markets where cramped quarters and urbanization are sending buildings ever higher.

"Transportation capacity is the name of the game," Schierenbeck said. "If you get rid of the ropes, then you're looking in the right direction."

Though Schindler ditched the idea of horizontal elevators in the 1990s, its own spin on the industry's future envisions clients tapping into a broad array of services.

"Why would you only push a button because you have a breakdown?" said Chief Executive Thomas Oetterli. "Why not use the same infrastructure to order something; (takeaway) food or your grocery shopping?"

His new myPORT building-access system is designed as a digital passport, accompanying smartphone users between home and office, with the potential eventually to double as a virtual bodyguard to navigate spaces such as dimly lit parking garages.

"We'll keep on the line until you are safely in the elevator," he said. "How much would someone be willing to pay for that? A few cents? If you move one billion people a day... that can make a big difference."

Schindler has also built a 3-D laboratory at its Swiss headquarters in Ebikon, where engineers wearing special glasses can walk inside a virtual elevator to check for design problems before installation.

Smart-lift evolution won't be a trouble-free ride onwards and upwards, however. Costs are paramount, said Hendrik Hesse, a specialist consultant who advises building owners on the installation of new lifts or modernization of ageing systems.

Innovation is inevitable, he said, but it will take longer than the companies would like for it to reach the masses. Not everything will succeed.

"It's always a question of cost," said Hesse, who previously worked for a leading European lift company. "Building owners want to save money and elevator companies want to earn as much as possible for services they should probably provide free."

ThyssenKrupp has not released price projections for the MULTI but says that the space-saving qualities will make it competitive in tall skyscrapers where traditional high-speed elevators can run to $600,000 each.

Elevators have been getting smarter for a while now.

In Swiss drugmaker Roche's 41-storey Basel skyscraper, for instance, the lifts produce electricity when they are braking and then feed it back into the building's grid.

"In off-peak times, the system removes lifts from the traffic pattern to save energy," said Markus Woellner, Roche's project leader for the building.

Elevators are also increasingly equipped with sensors to collect and transmit operational data to the cloud. If a door usually opens in a second but suddenly slows to 1.2 seconds, a technician gets a text message highlighting a potential problem.

Kone has an IoT pact with IBM's Watson, while ThyssenKrupp enlisted Microsoft to connect 180,000 elevators to the cloud by 2018.

Otis, meanwhile, has turned to telecoms group AT&T for wireless links for its elevators.

Regardless of all the bells and whistles, however, the main goals remain simple – to improve on the average four to six breakdowns a year and reduce the time people have to wait for lifts.

"If my car didn't start four to six times a year, I'd probably change it," ThyssenKrupp's Schierenbeck said.

Reporting by John Miller and Tom Käckenhoff with additional reporting by Georgina Prodhan in Belgrade and Jussi Rosendahl in Helskinki; Editing by David Goodman
Image credit by Reuters, Arnd Wiegmann
Want more? For Job Seekers | For Employers | For Contributors